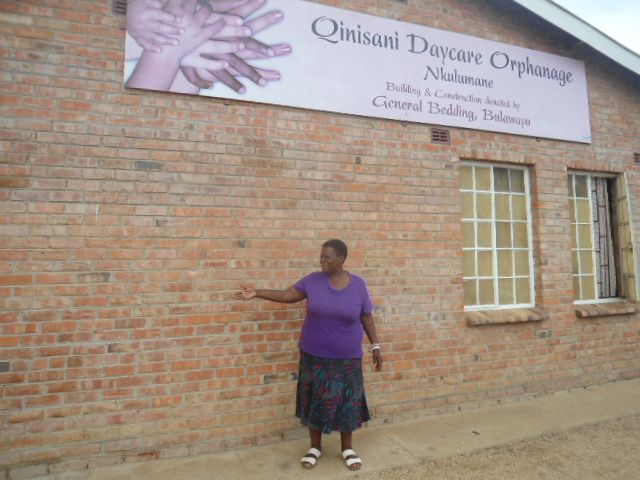 BULAWAYO – “Helping the needy, especially orphans and vulnerable members of the community, has always been within me as the chief orphan myself.”

These were the words of Yona Mpofu, founder and director of Qinisani Day Care Orphanage, situated in Bulawayo’s Nkulumane 5 Township.

The orphanage, founded in 2001 in Mpofu’s house in Nkulumane, has assisted hundreds of orphans in the area in discovering the potential within themselves.

“As I looked around Bulawayo, I realised that orphans were suffering, just like I also grew up suffering,” Mpofu, told the ZDDT News.

“I realised that a child who has lost parents is not always well-looked after in life. Sometimes those who remain behind with the kids do not look after them very well resulting in them becoming street kids, engaging in sex, drugs and all sorts of things at a tender age.”

She said her deep concern over the plight of orphaned children made her conceive the idea of an orphanage that would assist them.

“I did not know where I could start. I then invited other ladies who were my neighbours and said, ‘come here; I have this thought’ and some of them bought into my idea and we moved forward,” explained Mpofu.

She said, of the 11 other women she began with, only one, Jane Moyo, the institution’s treasurer, remains with her at Qinisani, while others gave up along the way.

Mpofu said she got assistance from the Bulawayo City Council and the National Aids Council in acquiring land and getting the organisation registered.

Qinisani Day Care Orphanage, built with donor funding, now has a day feeding scheme for the 90 children from the community who are presently assisted by the orphanage.

The orphanage also assists the children with clothes while also sourcing school fees for those who are not benefiting under the government’s Basic Education Assistance Module (BEAM).

During weekends, orphans at Qinisani are taken through extra lessons by invited volunteers

in subjects such as English Language, Mathematics and Science, in order to boost their performance in the public examinations.

“I thought we should have those children coming here so they could be somehow assisted as we talk to and interact with them,” said Mpofu.

“We keep telling them that being orphans does not mean they cannot do anything on earth.

We tell them that they must view themselves as people with a great potential and stop being preoccupied with the thoughts of being orphans.”

Born in Mzilikazi over 60 years ago, Mpofu, said she grew up always desiring to give to the less-privileged members of the society.

She went to Mzilikazi Primary School from Sub A up to Standard 1 and then proceeded to Lobengula Primary up to Standard 6 in 1966, after which she started fending for herself.

“I would make clothes and sell them outside the country. I would, at times, give to the less privileged members of the society. This thing of giving, I started it long back. It has always been within me,” said Mpofu.

“As I grew up working, I would always give. I did not want to see anyone suffering.”

The hard-working widow, who has worked for different companies in the industrial sites of Bulawayo and for the Ministry of Youth, retired in 2013 at the age of 60.

Mpofu said during her days in the Ministry of Youth, she worked with young people in Ward 22, advising them not to just sit and do nothing.

The mother of four, who said the most important thing is love for one’s community has to date not ceased working for the people of Bulawayo.

“The message that I can give to this generation is: ‘Our children, walk into our footsteps.’

First and foremost, know God, have love for other people, neighbours, and strangers; have love and be merciful. Learn to give,” she emphasised.

Mpofu said in everything she does for the community, she puts God.

“When we start work every morning, we always begin by prayer, because it is God who made this place come into being,” she said.